Porsche produced farm tractors before they began producing automobiles. Prof. Dr. F. Porsche developed three prototype gasoline tractors in 1934 but after WWII only companies in Germany that had produced farm tractors during and prior to the war were allowed to continue producing tractors. Since Porsche was not one of them, they signed licensing agreements with Allgaier GmbH in Germany and Hofherr Schrantz in Austria to use the Porsche engine design. In 1956 Mannesmann AG bought the licenses and began production of the new line of red Porsche-Diesel tractors in a state-of-the-art manufacturing facility. There were four models: Junior, Standard, Super and Master (14 hp, 25 hp, 38 hp and 50 hp respectively). Between 1956 to 1963 over 125,000 Porsche-Diesel tractors were produced. 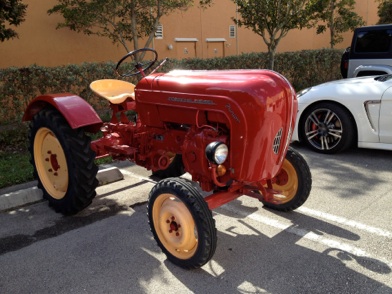 Purchased from the estate of Lowell Dunn
125,000 Porsche-Diesel tractors were produced between 1956 and 1963